The distillation and generation of freshwater is immensely important onboard a ship. Not only does the crew need water to remain hydrated to perform their functions, or for other domestic uses, but freshwater is also used as a cooling medium for the ship’s propulsion system, for washing down the ship superstructure and decks, and for creating steam in the ship’s boilers as a source of heat to be used in heat exchangers.

The freshwater distillation process involves the evaporation of seawater, using an evaporator, and then re-condensing the vapour by making use of a condenser. To this extent, a boiling or flash process can be used to create the water vapour for distillation. Another method of generating freshwater is by making use of a Reverse-Osmosis Plant.  Domestic fresh water, as it is known on-board a ship, is usually generated from a Reverse-Osmosis Plant (RO Plant).

As stated previously, the boiling of seawater is one method that can be used to distil fresh water. The simplified boiling process, shown in the diagram below, for this distillation method is as follows:

The Flash Process is yet another method used to distil fresh water from seawater. The flash process involves a method of distillation through several (multi-stage) chambers as can be seen in the diagram below. This process is also referred to as a Multi-Stage Flash (MSF) Process. An example of a Wartsila designed and manufactured MSF process plant is shown below.

The fundamentals regarding the operation of such an MSF process is as follows: 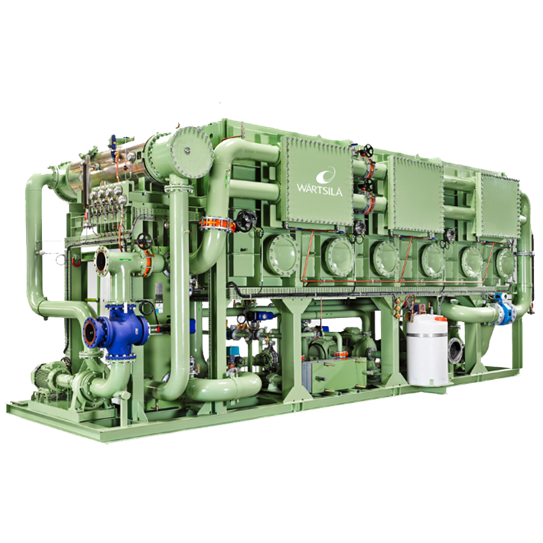 Another method of freshwater generation from seawater, which is mostly used on-board ships for the generation of drinking and domestic freshwater, is Reverse-Osmosis. Reverse-Osmosis is a membrane process and does not rely on a boiling or flash process to generate water vapour.  A simplified schematic of a RO plant is depicted below.  An example of a RO Plant is also shown next (note the RO membrane tubes). The RO process, with reference to the below, is as follows: 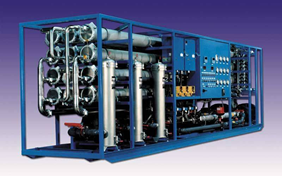 Next topic Oil and Water Separators »

Back to Auxiliary Systems »