The 2-stroke cycle as shown below occurs as follows: 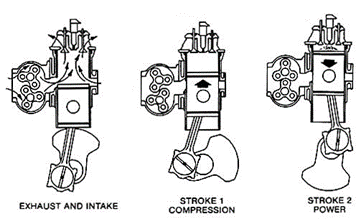 The 4-stroke cycle as shown below occurs as follows:

A Slow Speed Marine Diesel Engine usually has crankshaft rpm of between 100 to 120 rpm and operates on a simple 2-stroke cycle. By using a Slow Speed engine, a direct coupling can be made between the engine and the propeller shaft due to its slow speed in terms of crankshaft rpm. Most merchant vessels, for example oil tankers, cargo ships and bulk carriers, make use of this type of marine diesel engines.

These engines can also burn low grade fuel known as Heavy Fuel Oil (HFO). Due to the high viscosity of HFO, high viscosity being a measure of a fluid’s resistance to flow, the HFO requires pre-heater due to thin it out before being injected into the cylinders. Slow speed engines also have a high thermal efficiency.

This type of engine, due to its simple construction, has less moving parts, thus allowing these engines to have a much higher Mean Time Between Overhaul’s (MTBO) and less overall maintenance tasks to be carried out.  However, with the simple construction comes an increase in weight, making these slow speed marine diesel engines extremely heavy compared to its medium and high-speed counterparts.

Refer to Table for an example of the technical specification of a typical large slow speed marine diesel engine. In this case, the specification data was taken from a Wartsila X92 slow speed engine as shown in the figure as part of the table. 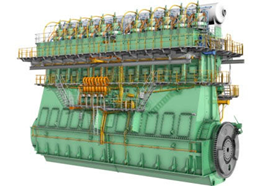 A Medium Speed Marine Diesel Engine usually has crankshaft rpm of between 250 to 800 rpm and operates mostly on 4-stroke cycle. By using a Medium Speed engine, a reduction gearbox is required between the engine and the propeller shaft due to its higher speed in terms of crankshaft rpm.

These engines burn either Marine Diesel Oil (MDO) or Marine Gas Oil (MGO). The most notable difference in MDO versus MGO is the method in which it is created. MGO is made from a pure distillate only, while MDO is a blend of different gas oils with a lower viscosity than that of MGO. MDO and MGO has a sulphur content of between 0.3 to 1.5 m/m % (mass per mass percentage). 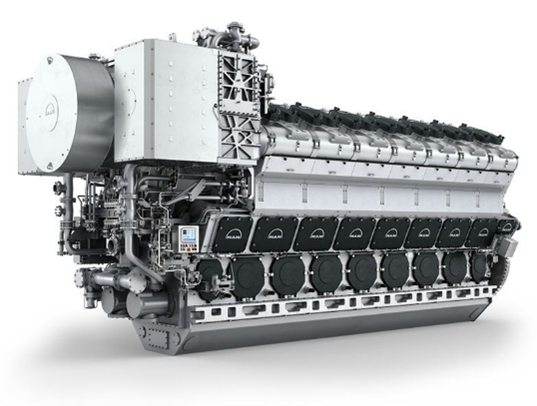 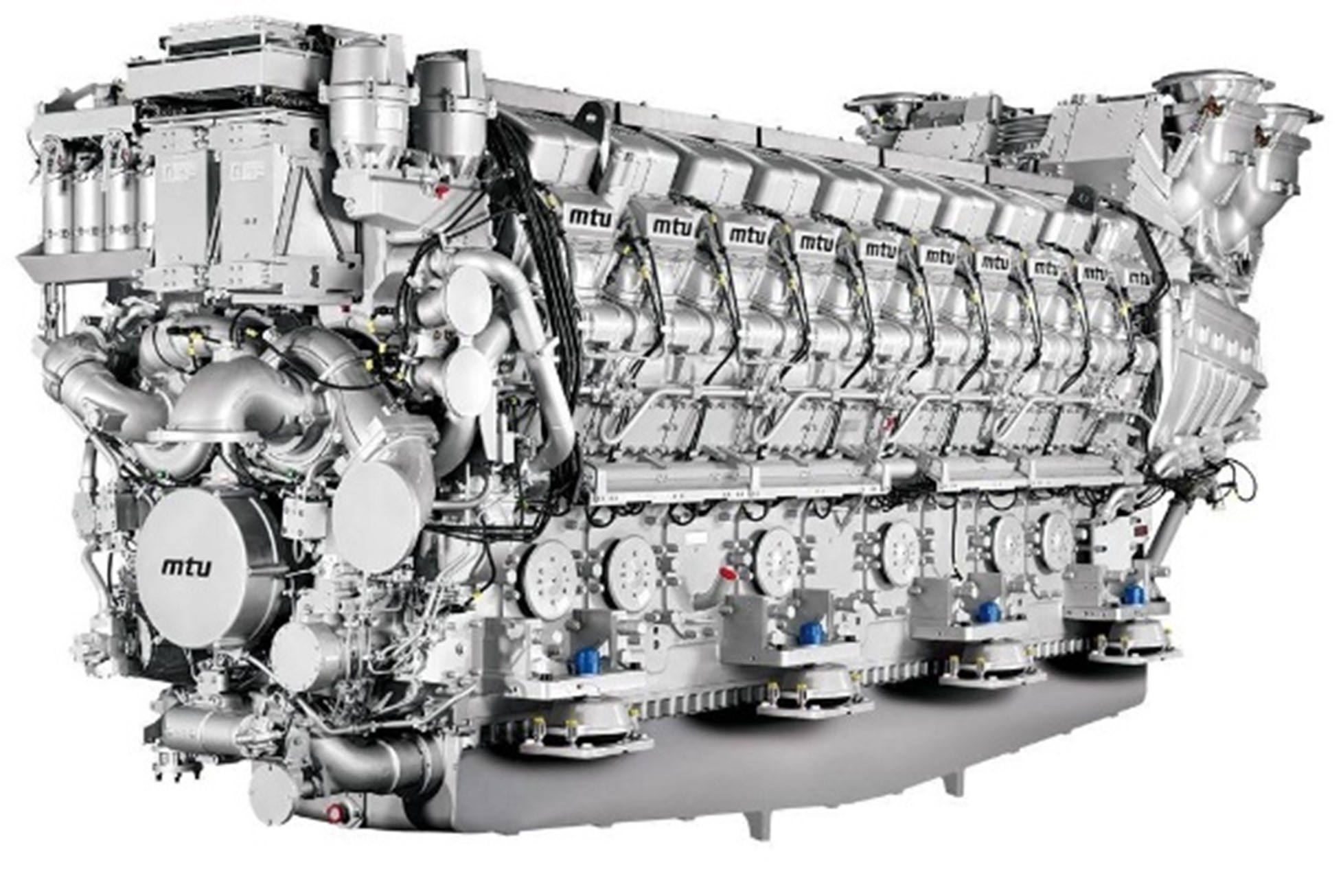 The use of Diesel-Electric Propulsion reduces the ship’s fuel usage as well as the ship’s environmental impact in terms of the emissions associated with constantly running big propulsion diesel engines. Electric motors also greatly minimize maintenance cost since it only consists of one moving part, the rotor, and reduces the number of running hours of the diesel engines as compared to a ship using only diesel engines as its primary mode of propulsion. In addition, electric motors allow for better maneuvering and steering of the ship at especially slower speeds.

The major disadvantages of the use of electric motors as a method of propulsion is as follows:

An example of a diesel-electric propulsion system with two electric motors in series acting as the prime mover of the vessel is shown below. In this layout three diesel generators generate enough electrical power supply, which is distributed and controlled via the switchboards, and then routed to the electrical motors. These motors are then coupled to the propeller shaft via a reduction gearbox. 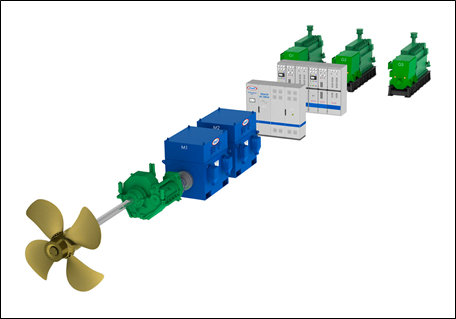 Turbines are also used as a prime mover in certain ship types, but mostly in naval ships where diesel engines are operated during cruising and the turbines are started when the ship’s maximum speed is required for intercepting a vessel of interest, for example.

The general types of turbines used, are either gas or steam turbines.

Gas turbines operate on the same principle as turbines used on commercial aircraft, with jet fuel (e.g. Jet A1) as its fuel. The rpm of the turbine shaft is reduced via a reduction gearbox, and ultimately rotates the ship’s propeller or waterjet impeller.  An example diagram of such a gas turbine and its operation is shown below. 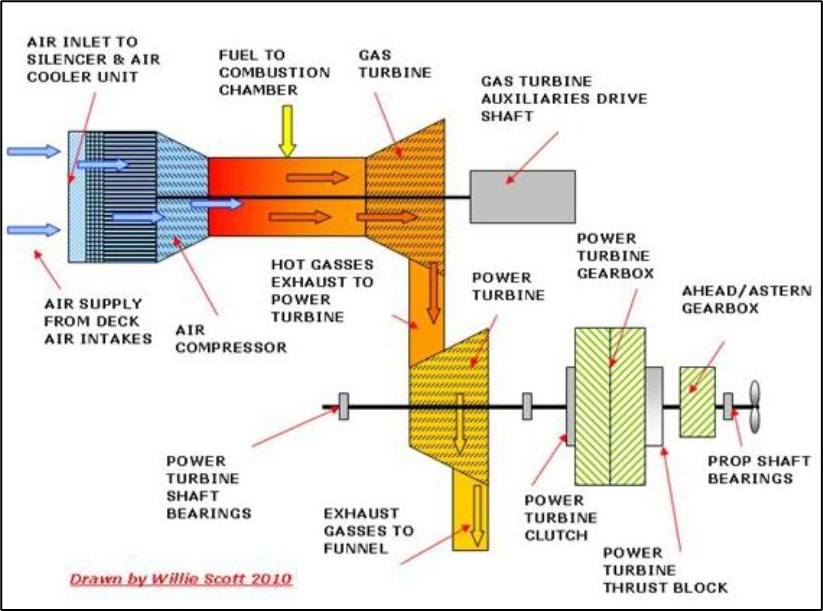 Steam turbines operate by running high-pressure steam through its turbine blades, which in turn turns the propeller shaft.  The fuel source for a big steam turbine is usually a nuclear power plant. The nuclear reaction in the reactor core provides heat to the steam generator. Steam turbines are usually reserved for big ships like naval aircraft carriers and large destroyers. A diagrammatic example of a nuclear propulsion plant of a ship is shown below.

More intricate combinations do however exist, as is depicted in the propulsion system layout shown below. 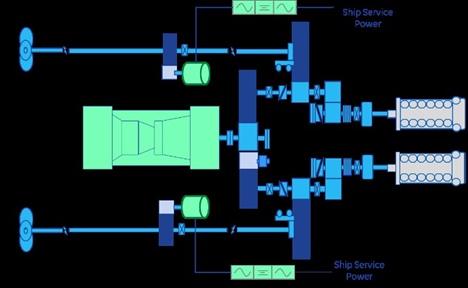 The above system consists of two diesel propulsion engines, one gas turbine, and two electric loitering drives connected via an intricate combination of gearboxes to drive two propeller shafts.

There are various types of prime mover types and manufacturers to select from within the ship building industry, but how do these prime movers and manufacturers measure up in terms of the “Green” objective discussed mentioned earlier in this Learner Guide, as well as the minimization of air pollution as stipulated by the IMO in the MARPOL regulation Annex VI? 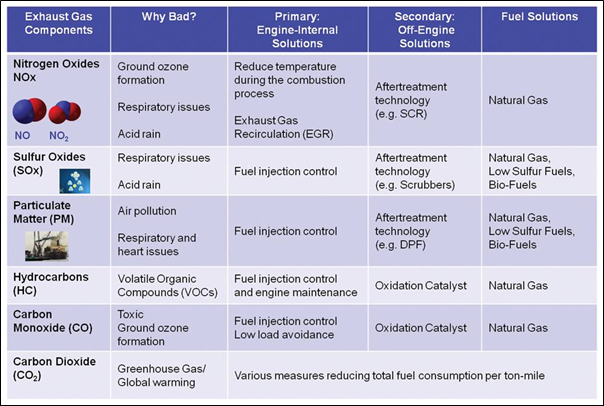 Back to Marine Engineering Systems »