A ship in simpler terms is a plant, or system, consisting of various smaller systems working together in harmony. Think about the human body as an example of an overall system consisting of various sub-systems. Without these sub-systems, a human body will not be able to function affectively, reliably and efficiently. The same can be said of a ship. A ship can therefore be defined as a “system of systems”. A “system of systems” can be further defined simply as:

A collection of dedicated systems (sub-systems) that pool their resources and capabilities together to create a more complex system, which offers more functionality and performance than simply the sum of the constituent systems.

The only way of achieving a complete System of Systems, is by means of Systems Integration.

Systems integration is required to ensure that all the sub-systems onboard a ship or plant is perfectly paired. System Integration can be defined as follows:

System Integration is the bringing together of the component sub-systems into one system and ensuring that the sub-systems function together as a complete System of Systems.

It is therefore important that all sub-systems can operate in unison and correctly integrate and interface with each other where required.

System Categorisation in the Marine Industry

The ship system, its sub-systems and sub-sub-systems can be placed in various categories to make the life of the Marine Engineer and Naval Architect much easier when working on specific systems and ensuring that all systems that forms part of the ship is properly addressed.  This is called System Categorisation, of which you have already seen an example of the SFI and ESWBS systems categorisation methods.

These three categories listed above, in terms of the onboard ship systems, is still at an extremely low level, and needs to be broken into much higher levels to reflect greater detail, especially in the ship building industry. As an example of the depth of these levels, a collection of sub-systems and components of a ship is shown in Table below. These are some of sub-systems and components that you will find listed in their specific SFI Group or System Category:

By making use of a standard hierarchical breakdown of the various systems that constitute a ship, excluding propulsion and hull, you will be able to note all the aspects that must be addressed and on-board systems considered.

Level 3 and 4 Systems of the Safety Level 2 System

Level 3 and 4 Systems of the Hotel Level 2 System

Level 3 and 4 Systems of the Cargo Level 2 System

It is difficult to categorize the myriad of components and sub-systems of a ship in the three categories mentioned earlier, thus methods of system categorisation and groupings were developed to ensure that a standardised categorisation system (breakdown structure) is used, either internationally, or shipyard specific.

As mentioned earlier in the Learner Guide the SFI groups 1 – 8 are most widely used commercially, while the ESWBS groups 000 – 900 are used in Naval applications, but still remains commercially useful.

Work Breakdown Structures or System Categorisation standards other than the SFI and EWSBS groups that can also be used are a specific Shipyard’s Specification, the Classification Society Master List or the grouping used by ship Maintenance Management Systems:

Shipyard Specification: Shipyards tend to develop their own breakdown and/or categorisation structures to suit their needs, as well as their configuration management systems.

The SFI method of system categorization is the most widely used. Due to its wide user-base, this specific categorization method will be discussed in greater detail in the following paragraphs and figures. As stated earlier, the SFI structure is broken down in sub-structures from 1 to 8.  We will only focus to a depth of three levels per sub-structure, as you can go down more than 6 levels up to “nuts and bolts”.

The level 2 structures from 1 – 8 is listed below from left to right. 1 Being “General” and 8 being “Ship Common Systems”. The Ship is considered as the Level 1 system. Sub-structure 1 “General” is mostly aligned with administrative procedures when a ship specification is written.  As this learning opportunity is purely focussed on the technical aspects of Marine Engineering and Naval Architecture, no further detail will be provided on “General”. 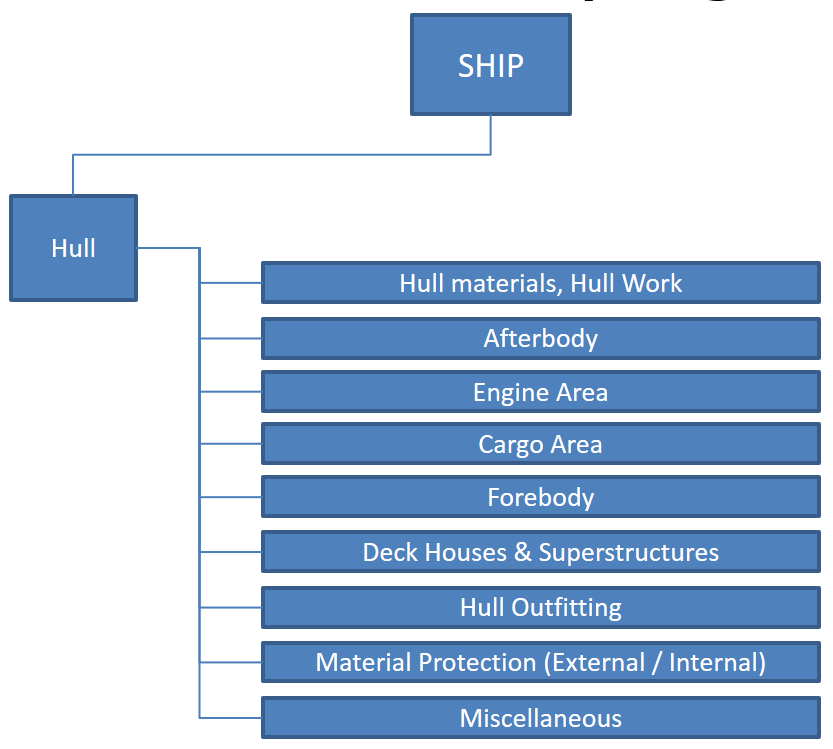 System categorization is extremely helpful when developing a ship specification and for the various systems of the ship that requires consideration during the ship design process.

System categorization is also extremely useful in other aspects, for example:

Back to Marine Engineering Systems »