The Costa Concordia is a prime example of how damage stability affects a ship.  Damaged stability will be touched on in slightly more detail later in the Chapter. In the case of the Costa Concordia, the cruise liner contacted a submerged rock, which resulted in the progressive to complete flooding of 5 watertight compartments causing heeling to STBD, which aided in further progressive flooding via deck 0 due to submerging. Eventually the vessel came to rest on her STBD side on a bank.  This incident resulted in the loss of 32 lives.

A simple definition for ship stability is “the characteristics or tendency of the ship to return to its original state or upright state, when an external force is applied on, or removed, from the ship.”

Intact Stability: The normal operating condition of the vessel.

This is calculated at Lightship and Full Load conditions. A vessels Lightship is when there is no fuel, cargo, crew, passenger, consumable or other variable loads on-board. Full load is the exact opposite of lightship. This is when the vessel is ready for departure with all onboard systems at maximum capacity.

Damaged Stability: The operating condition of the vessel when damaged.

Damage stability assesses the stability of a vessel based on either single or multiple compartment or engine room flooding. These damage stability conditions differ from ship to ship and is also dependent on the type of use of the ship. 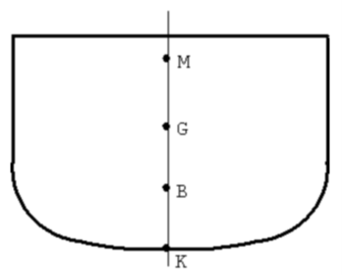 Intact Stability is one of the main aspects of Ship Safety that must be considered. Inclusive of this, the ship or vessel’s Stability Book is of high importance and needs to be certified prior to the vessel being put in operation.

Below is a ship stability diagram showing the centre of gravity (G), centre of buoyancy (B), righting lever (GZ), and metacentre (M) with ship heeled over to one side. Note that for small angles, G and M are fixed, while B moves as the ship heels, while for big angles both B and M are moving. 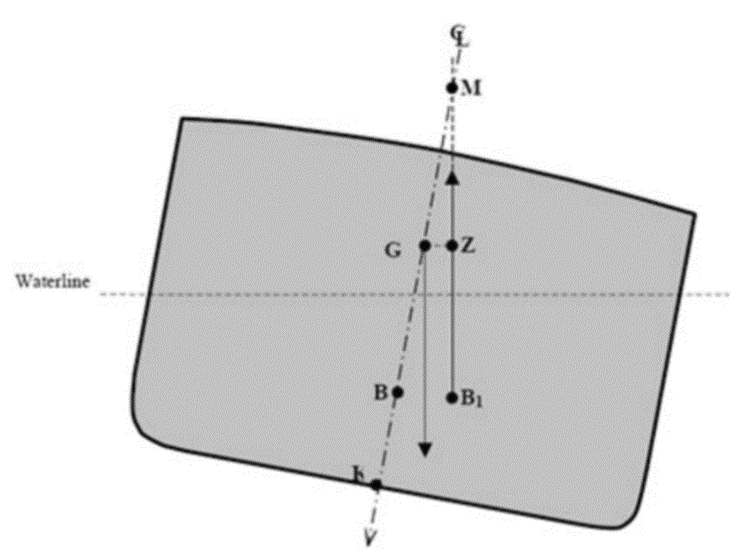 The force, or moment, that brings the vessel back to its original stable state after an external force has been applied to the ship is called the Righting Moment.

The Righting moment (RM) as the ship heels can be calculated as follows:

Where Δ is the ship displacement and GZ is the length of the Righting Arm calculated as follows:

The difference between the small and large angles of heel is due to the fact that at large angles the buoyant force vector does not pass through the metacentre (M). The reason is that, as the angle of heel increases beyond a few degrees, the path of the centre of buoyancy (B) departs from a circular arc of radius BM.

The consequence of this departure is that the righting arm is no longer related in any simple way to the metacentric height, that is, GZ is not equal to GM , as it is in the case of very small angles of heel. In fact, no exact formula is known that relates GM to the righting arms GZ for large angles, except for the very restrictive class of hull forms for which the centre of buoyancy traces a circular path when the vessel heels to any angle.

This will be the case only for spheres, circular cylinders, or bodies of revolution floating with their axis of symmetry parallel to the water surface. For such forms, the transverse metacentre lies on the axis of symmetry and the righting arms for all angles of heel are equal to GM . The only practical hull forms satisfying these conditions are circular section pontoons and submarines whose hull forms are essentially cylindrical bodies. 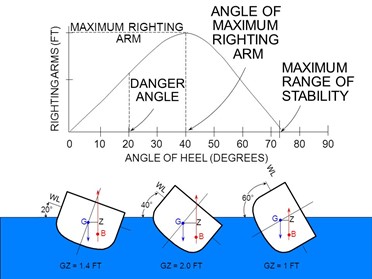 Of course, a ship will not be left to its own devices when encountering large forces negatively affecting the vessels stability, or which may even cause flooding. The following protection measures are employed on ships to prevent this:

In the case of damage stability, the stability is a damaged condition with a flooded compartment, or compartments. The applicable Damaged Stability criteria depends on the vessel size and type in question.  It is probabilistic, and prescriptive rules, giving prescribed survival under damage criteria, is usually in terms of the rules as specified by the IMO and classification societies.

Damage stability is also usually related with bad weather where it is possible for a ship to capsize in head seas.  Passengers ships are generally designed for “Safe return to port”. Meaning that if they are damaged, the ship would still be able to return to port under its own power, without putting the lives of passengers in danger.  Naval vessels generally require that the vessel is still able to move, fight and float.

Next topic Ship Performance and Powering »