Compressed air remains a vital resource onboard a ship and is used for various applications and at various pressures, from the operation of pneumatic tools, to the starting of main propulsion engines. Compressed air on-board ships are generally used for the following applications:

Four types of air compressors can be found on-board a ship, namely:

Out of all the reciprocating air compressors available in the marine built environment and shipbuilding industry, the 2-Stage Reciprocating Air Compressor is probably the most commonly found on board ships.

With reference to the below diagram depicting the major components of a 2-Stage reciprocating air compressor, this type of compressor compresses air in two stages as follows: 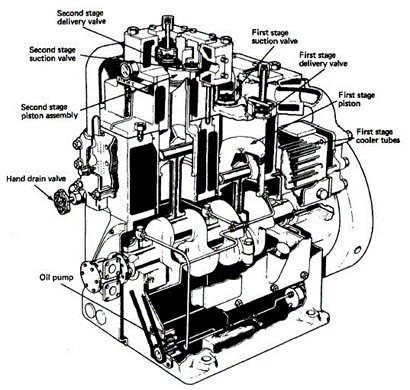 The below diagram shows a simplified control compressed air system diagram for the provision of control air to its various users and/or mechanisms on-board a ship. Control Air is mostly used for operating pneumatic valves, as well as for controlling vital functions of the ship’s engines i.e. engine speed, direction of running and starting/stopping/reversing. Due the important nature of the control air, it needs to be as clean as possible. Thus, filters for the removal of particulates and oil, as well as water traps and drains for the removal of condensate is placed at various positions in the system. Various isolation valves are also fitted throughout the system to isolate separate sections in the event of repair. 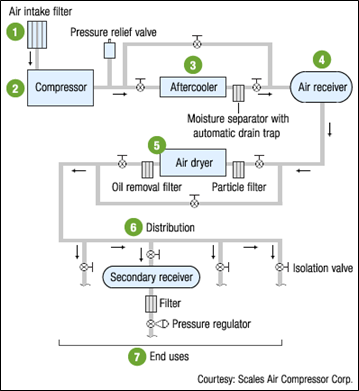 With reference to the above diagram, the following constitutes a general control compressed air system:

1 – An air intake filter removes all large particulates from the ambient air preventing any unnecessary damage or blockage to the compressor.

2 – In marine applications, the primary compressor will mostly be a multi-stage reciprocating air compressor. A pressure relief valve would be fitted just after the compressor to prevent overpressure damage downstream of the compressor outlet.

3 – The compressed air discharged from an air compressor is generally hotter than the ambient air temperature. Compressed air at these temperatures contains large quantities of water in vapour form. As the compressed air cools this water vapour condenses into a liquid form. To remove as much moisture from the air as possible, air needs to pass through an Aftercooler to remove all water vapour by means of condensation. An automatic moisture separator and drain trap is installed directly downstream of the Aftercooler to separate the water/moisture from the cooled down air.

4 – The air receiver stores the compressed air at a high pressure. Usually 40 bar.

6 – Now that the air is free of particulates, moisture and oil, it can be distributed to the various users on-board the ship. Not all users however operate on high pressure 40 bar air. Control air, for example, needs to be reduced to approximately 5 bar for use. The high-pressure air is then stored in the specific user’s air receiver. It passes through another filter to remove in particulates or contaminants that might have dislodged in the air receiver. Finally, the pressurized air passes through a pressure regulator to reduce the pressure down to the required 5 bar.

7 – Finally, the air is passed to the end-users and/or mechanisms making use of the compressed air.

The air start system of the ship’s main engines makes use of a similar compressed air system supply, but just at a much higher pressure than that of control air. The diagram shown below is an example to illustrate the application of compressed air for engine starting. 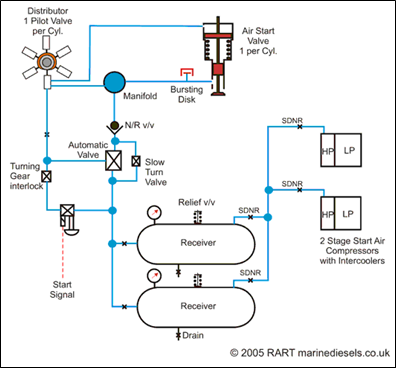 Back to Auxiliary Systems »